This past week bombshell reports have revealed the insidious extent of Doctor Anthony Fauci’s seemingly unquenchable thirst for bizarre experimentation. First came reports of how his NIH funded the torture of dogs which included, but was not limited to, placing their heads into an enclosure so they could be eaten alive by parasite-infected flies. That story was then replaced by another where Fauci directed funds to an experiment that injected toxins into the brains of monkeys.

Now, another similar story is breaking, this time involving New York AIDS orphans who were used as lab rats to experiment with the effects of highly dangerous AIDS drugs on humans.

Dr. Fauci funded a study in Tunisia where beagle dogs were eaten alive by parasite-infected flies.

And Dr. Fauci was more recently caught funding gain-of-function research in Wuhan, China laboratory blamed for the production and leak of the coronavirus.
Fauci lied about his funding of the lab under oath numerous times.

Now this…
Dr. Fauci’s NIH was also caught funding experiments on AIDS orphans at a New York City hospital in 2004.

In 2005, the city of New York hired the VERA Institute to form a final report on the drug trials. VERA was given no access to medical records for any of the children used in trials. Their report was published in 2008.

They reported that twenty-five children died during the drug studies, that an additional fifty-five children died following the studies (in foster care), and, according to Tim Ross, Director of the Child Welfare program at VERA (as of 2009), 29% of the remaining 417 children who were used in drug studies had died (out of a total 532 children that are admitted to have been used). [LINK]

The WIKIPEDIA writers cover up all details, as is expected.

No payment or compensation has been paid to any of the children used in the trials, or to their families.

This is the same man who has helped the drug companies and politicians to force vaccine mandates on nearly every man, woman, and child living in America for a Covid virus that has a 99.7% survival rate – a Covid virus mind you that appears to have been funded, yet again, by Doctor Fauci’s NIH. 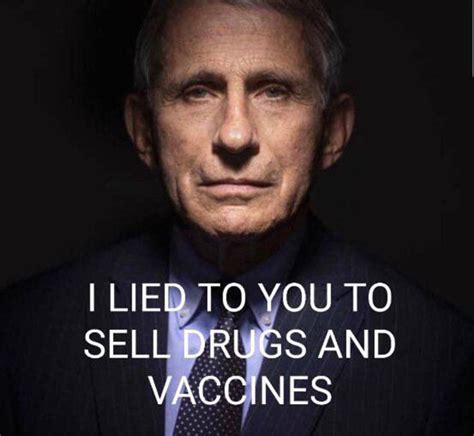